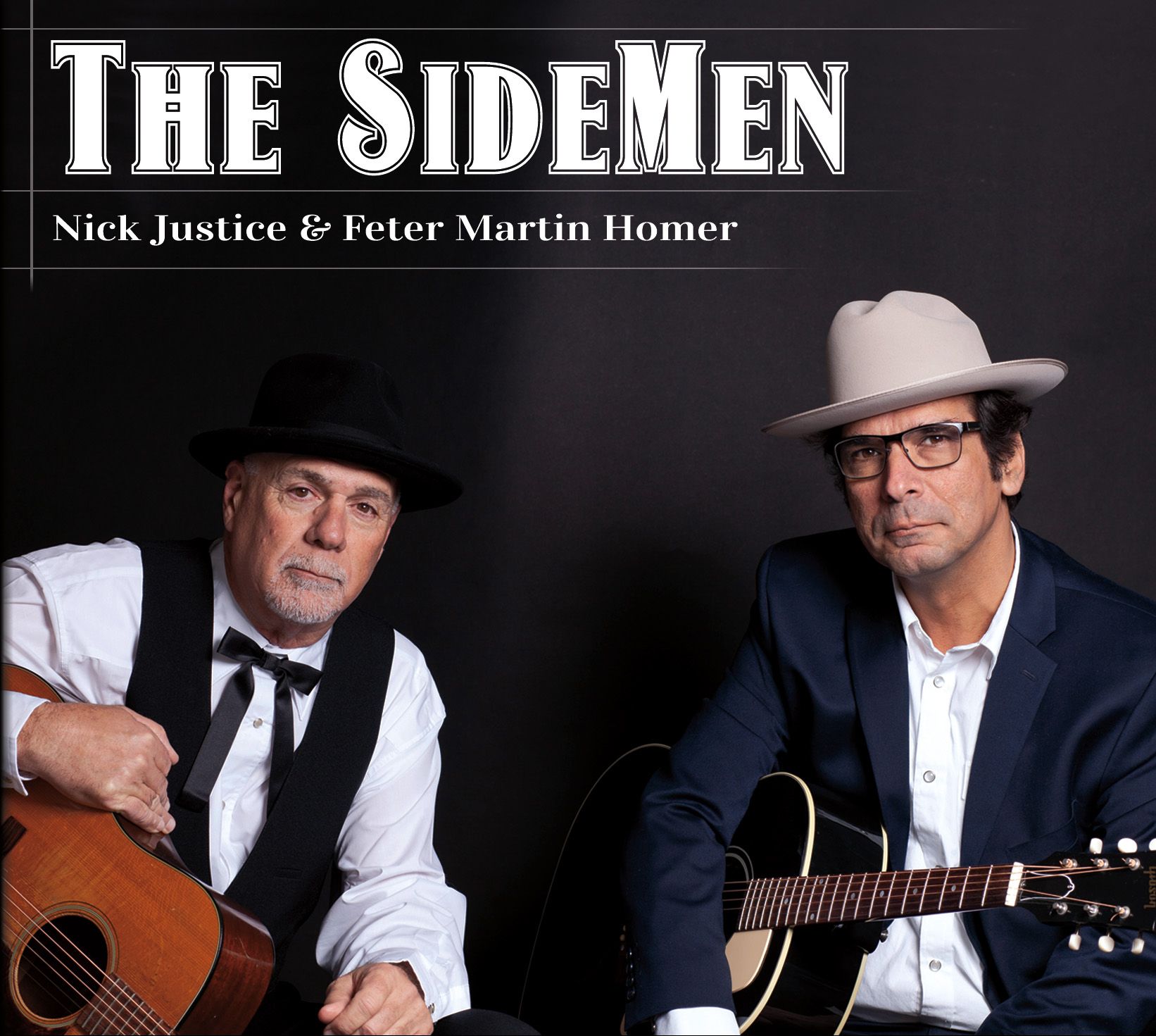 THE SIDEMEN (NICK JUSTICE AND FETER MARTIN HOMER) WILL RELEASE AN EPONYMOUS DEBUT WITH HELP FROM GABE WITCHER AND ALAN DEREMO JULY 20th,  2022
The Duo Has Roots In Early Folk Music With Dashes Of Country And Appalachia

Los Angeles, CA May 2022—Just a year ago, Nick Justice and Feter Martin Homer decided to weave together the threads of their individual solo careers to form The SideMen. Now in 2022, the duo are releasing their first eponymous album.  “What brought Feter and I together was our love for the simplicity of folk music,” explains Justice.  “We’re a couple of journeyman singer songwriters who couldn’t be more opposite (Feter being Turkish and me being a kid from the Bronx), but we came together over our shared love of folk music—where the music frames the lyrical story.”

Growing up on the North Shore of Long Island, Nick Justice was raised on pop music and AM radio.  As a teenager, he leaned towards the sounds coming from California and  in the 1980s landed in San Diego with a guitar in his hand.  For years he played in various bands such as Chords of Fame, Guns for Hire, and as a solo act.  He had the good fortune to open for such artists as INXS, The Blasters, X, The Bodeans and The Del Fuegos before becoming disillusioned by the music business in 1996 and putting his guitar down to get married and raise a family.

Feter Martin Homer cut his teeth as a blues guitarist playing in bands throughout the United States.  Press and audiences have lauded his chops as powerful and passionate and his first self-titled solo CD (2020) revealed a strong vocal presence to accompany those guitar chops. Now, as The SideMen, the two artists blend traditional Folk, Country, and Americana and produce soulful vocal harmonies over chiming acoustic guitars, mandolin, banjo, and harmonica.

The SideMen was co-produced, engineered and mixed by Richard Bredice, former lead guitar player for Jules and the Polar Bears. The record was recorded, mixed and mastered at his Woodland/Bredice Studios in Irvine, CA.  Bredice brought in Gabe Witcher to add fiddle to the sound.  Witcher is a Grammy Award winning American multi-instrumentalist, and a founding member of the string ensemble, Punch Brothers. Bredice has known him since he gave him guitar lessons as a kid.  “Turns out the timing was perfect. Gabe had a week off before he was starting a tour with the Punch Brothers and joined our project.” Alan Deremo was brought in to add bass. A former member of John Denver’s touring/recording band, his credits also include; Dave Alvin, Vince Gill, Richie Furay, Lee Ann Womack and more.

Formed during the pandemic, The SideMen nonetheless became busy, playing live streams during lockdown and emerging to play their first live gig ever as a duo at the Tucson Folk Festival. Since then, they’ve played the Orange County Fair, Silverado Folk and Art Festival, NAMBA Performing Arts Center in Ventura, CA and Collage Art and Culture Center in Los Angeles.  On the books for this spring/summer are the Idyllwild Songwriter Festival and the Flagstaff Folk Festival.

The SideMen typically perform a mix of songs from their solo careers and their collaborative ventures. “We wanted our stories to be the focus of the songs so we decided musically we would keep things pretty sparse instrumentally,” said Justice. “When you hear our record it pretty much is how we sound live.  We wanted our sound to be like listening to a couple of guys playing music on the porch on a nice summer day, singing and sipping lemonade.” The SideMen are also a very visual band with an old time set singing into vintage mics with a Grand Ole Opry set-up. “I think when folks see us come in and set up to play, they think it’s going to be a pretty mellow night. When we start playing, hands start clapping and feet start stomping!”

The first four songs are written by Feter Martin Homer, “This Storm Shall Pass Away”, “Arise”, “Early Sunday”, and “Virginia”.  “Meet the Train”, “Secret Soul”, “Come Dance With Me”, and “Let’s Get Out of Here” were all written by Justice.

“Lady of the Roses” and “Light as an Angel” were written as a collaboration between Homer and Justice. “Lady of the Roses” was the first song they wrote together.  “We were out the Tucson Folk Festival and it was our first real coming out as The Sidemen,” said Justice. “It was about 110 degrees and we thought it best to stay in the cool air of our hotel room.  We were just sitting and watching tv and Feter was strumming some chords and humming a melody. I asked him what it was and he stated he wanted to write an answer to a song I wrote with a western theme. He keep singing the phrase Lady of the Roses which I thought was pretty cool. I took out my phone and preserved the melody. When we got home from Tucson on Sunday night I had an idea of a mysterious lady who died but whose spirit lived in the forest and would appear every so often surround by blooming roses. ‘She floats in the night like a spirit in a dream.”’

The two’s collaborations start with Homer coming up with a melody and chord changes and Justice writing the lyrics. “‘Light As an Angel’ came about literally in 10 minutes before a rehearsal,” he said.  “I came in to the room and Feter was strumming and singing the same phrase over and over…”Light as an Angel”. I picked up a pen and wrote the first verse and chorus and then finished the middle eight later that evening. The song is about those in your life without a care in the world. They breeze in and breeze out. They are who they are never taking responsibility. Must we repent to get to heaven? Or will that idea long put in my mind as a child, ‘or will unforgiveness loosen its grip.’”

On most of The SideMen tracks, Justice and Homer would set up either across from each other or in separate rooms and play the tracks live. “We virtually did no over dubbing,” Justice describes, “I believe there is one short B3 organ passage on ‘Arise’ to give a ‘churchy feel’ and then we decided to add bass to a number of the tractions to give the songs more foundation. It was very important for us to have this album sound like an early folk record.”

The SideMen will take you back to more honest times with their music and its simplicity. They are songs that tell the stories of the forgotten, those with broken dreams who are lost souls on the search for redemption.  Having two songwriters and two different lead vocalists who also sing harmony brings a freshness to the music. In other words, It’s music that makes folks feel good.