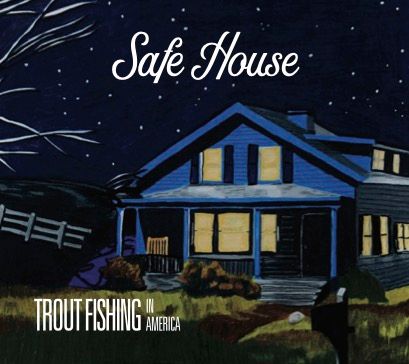 Recorded In Their Arkansas Studio During The Pandemic This 13-Track Album Showcases Their Acclaimed Musicianship, Humor, And Inspiration

“…A willingness to at once make fun of our most annoying daily habits, then to touch our hearts with tender and passionate images of family life, is what makes the connection between Trout Fishing in America and its audiences so compelling and poignant.” —National Public Radio

West Fork, AR January 2022—There is a handful of musical duos who can say they’ve been playing together for over 45 years and Trout Fishing In America is one of them.  Meeting in the 1970s in Houston, TX, Keith Grimwood and Ezra Idlet were a part of the five-piece band St. Elmo’s Fire.  When the group dissolved, Grimwood and Idlet formed Trout Fishing in America, named after Richard Brautigan’s novel.

With Grimwood on upright and electric bass and Idlet playing a variety of guitars, the singer/songwriters built a nationwide fanbase by delivering a percussive, vibrant sound and a dynamic stage presence.  TFIA earned critical recognition as an eclectic folk-rock band who writes songs for all ages. The band received four Grammy nominations in the Best Music Albums For Children category, as well as three National Indie Awards, multiple Parent’s Choice and NAPPA Gold awards, and The American Library Award.

In the 1980s, TFIA was in the first wave of artist-owned labels (Trout Records) to successfully record and market their own music. The band’s homegrown success exploded in the 1990s leading to regular touring throughout the U.S. and Canada and the 2000s brought additional acclaim in children’s music. It’s not unusual for three or four generations of family to show up at a Trout performance which is a point of pride for both Grimwood and Idlet.  “For years, we would play shows in schools around the country.  Those kids grew up and had kids.  They played our music for them and brought them to our shows. It is amazing to see generations of a family all at a Trout show; everyone gets something out of the performance,” said Grimwood.

March of 2020 brought touring to a halt for these self-described “road dogs”.  After a month apart, they reunited at the Trout House Studio and did what they do best:  they wrote songs together.  The studio became their safe house where they could experiment with a variety of musical styles.  They wrote over a dozen new songs and performed monthly live streams to stay connected with their fans.  The result is their 25th album, Safe House.

“Taking this break gave us time to reflect on our lives and our musical career,” explained Grimwood.  “We found ourselves returning to our various roots. We took a look at the world and put our ideas into the musical styles that have been the soundtrack to our lives. This time has been inspirational for us as instrumentalists and writers.” Idlet added, “Our writing process has always been a collaboration.  Keith tends to be a lyrical generator and I’m a musical generator.  Those are just our tendencies.  We bring our ideas to each other and then work together on editing and creating.” The only outside musician on the album is Adams Collins from the bluegrass band Arkansauce.  Collins plays vibraphone to “Oh, Those Afternoons” which accentuates the jazz rhythm of the song.

Safe House contains elements of rock, jazz, funk, bluegrass and swing, and consists of eleven original songs plus covers of Susan Werner’s “Barbed Wire Boys” and Gail Lewis’s “Up and Away”. The title track kicks off the album.  “With the opening chord it feels like we’re on a giant stage in a huge arena full of people,” said Grimwood.  “Lyrically it reflects our vulnerability.  The earth, our home, our loved ones.  There are many safe houses. We can’t take them for granted.”

Idlet plays a variety of instruments on the album including the bouzouki on “We Have Not Arrived”.   “The bouzouki deserves some writer’s credit,” Grimwood acknowledged. Idlet added, “When you get a new instrument, it seems like the songs fall out of it.”  Grimwood plays fiddle on “Freeze” and “Where’s That Dog Gone Now?”. “The fiddle he plays lived in pieces in a barn in Tennessee until I inherited it,” said Idlet. “It stayed in pieces in my attic for about 30 years until Keith had it repaired and adopted it as his own.”

You hear the band’s signature sense of humor in “We’ll Always Have Ardmore”—“We’ve played some great gigs in our life,” stated Grimwood.  “This is a song about the other ones.” “We were attacked on the stage of a Holiday Inn/By a man with unquenchable thirst/You'd think we'd hit bottom/But even bottoms have bottoms/And that wasn't even the worst”.  The album ends on a positive note with “Looking at a Rainbow”—“If you're looking at a rainbow/Then you made it through the storm/I can taste it. I can feel it/Just as real as the blossoms of a redbud tree”.

When asked what he wants people to know about Safe House, Idlet responded with, “There’s more where this came from! We have worked together for 45 years and remained friends and are passionate about what we do. In this industry it’s easy to be jaded—we’re not. We’ve gotten most of our recognition as a band that makes family music. Our knack is for exciting live shows that work for all ages. People often say that they leave our shows feeling better than when they arrived.”