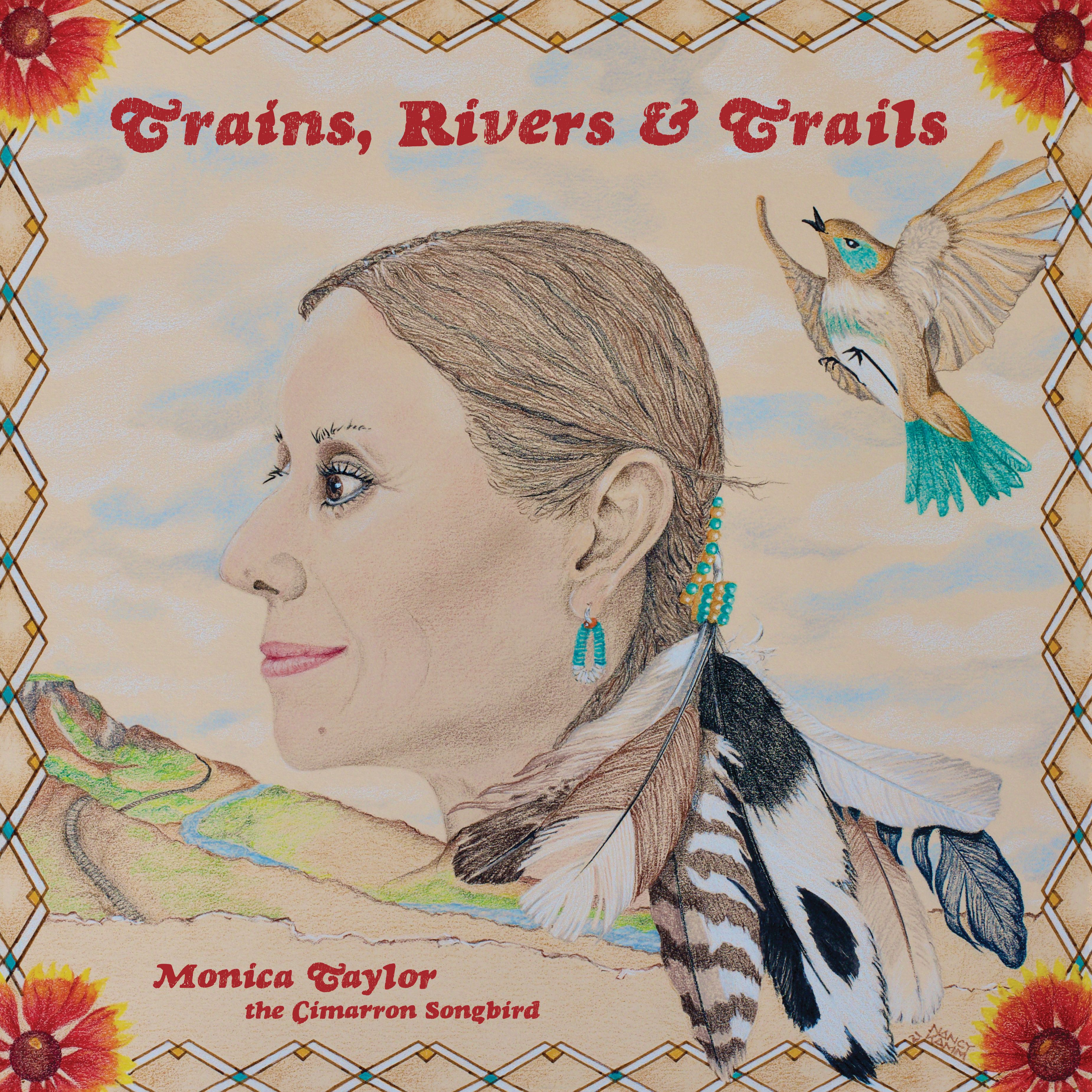 The “Cimarron Songbird” Tells Her Down Home Stories Through Music With The Help Of Fellow Okies, Including John Fullbright and Jared Tyler

Tulsa, OK May 2022—A Perkins, OK native, Monica Taylor’s musical roots are at The Farm, which is still the epicenter of Red Dirt Music. Her nickname, The Cimarron Songbird, was given to her by Jimmy LaFave and Bob Childers, thanks to her distinctive singing style and her home near the Cimarron River.  She sings from the heart, telling stories of red dirt roads, home, fence posts, trains, and sharing her Cherokee Indian heritage as well as her Scottish roots.  “I’ve always wanted to put out an album of songs about rivers and old dirt roads,” she confesses.  “I love these topics. Being a country girl from birth, these are the things I am at home with.”

Taylor has been performing annually at The Woody Guthrie Folk Festival since its second year in 1998.  She has performed with Garrison Keillor on the Prairie Home Companion show, The Nitty Gritty Dirt Band, Sam Baker, Keith Carradine, Ellis Paul and Tom Skinner, among others. She also hosts the popular Cimarron Breeze Concert Series in a old church near her farm in Perkins, OK.

Trains, Rivers, & Trails is Taylor’s 9th album, and 3rd solo album. She’s put out 3 albums as part of the western trio, The Cherokee Maids & Sycamore Swing; 3 albums as part of The Farm Couple folk duo, and 2 solo works; Cimarron Valley Girl (2006) and Cotton Shirt (2009). The new 11-track  record is produced by Taylor and her husband and musical partner, Travis Fite.  It was mastered Sarah Register and mixed by both Fite and Tyler.

“I think I’ve been playing with Jared for 20 years now,” Taylor muses. “He reads me like Travis does and we have the same ability to sing with each other as Travis and I do.  Putting us all together is quite a cool thing—very much like blood harmonies.  I can feel it and I can see it on the faces of those listening.” She’s known John Fullbright for 20 years or so, as well. “John is from Okemah, OK which is Woody Guthrie’s birthplace and where the Woody Guthrie Folk Festival is held. I met a teenage John wandering around the campgrounds with a banjo, sitting in with people and playing songs he was working on.  Man, they were so good! He is a dynamic performer and songwriter- I am so proud of him! Over the years he has joined me on stage many times. It was a joy over the pandemic downtime to share so many days with him in the studio.”

Trains, Rivers, & Trails is a mixture of original songs, some co-writes and a few covers.

Setting up the album is the original song “The Sound of the Train”.  “On each album I’ve put out, there is always at least one song about trains. I actually received a letter from a man in Northern Canada who had every recording I had out at the time. He said, ‘I love your songs-especially your train songs.  I’ve love to have a recording of yours that is all train songs.’ Well, this is as close as I can get, for right now, my friend.”

Each of the songs has a story behind them. “Gentle on My Mind” and “The Ballad of Easy Rider” (Roger McGuinn cover) make Taylor’s top 5 favorite songs about freedoms and traveling. “Camping along a side road in the desert or mountain stream, or in mountains overlooking a beautiful valley below.  These are things I have worked into the last 25 years of my life on a very regular basis.”

“Salty Tears” was inspired by the ethnic cleansing by our own government in the early 1800s. “Almost all of the  tribes on this continent were being herded to Indian territory (now Oklahoma) at that time.  They each had their Trails of Tears. The song is about my own great great grandmother who was 13 years old when she, along with her mother, father, sisters and brothers, walked that trail together.  Her parents and sisters died along the cold trail.  This is her story.”  On a side note, Taylor has just recorded this song in Cherokee for an album for Osiyo! TV- The Voices of the Cherokee People OETA-PBS.

“Down in Louisiana” was recorded by many country artists over the years. “I learned the song in the 80s version from The Whites; Buck White on piano, his daughters Cheryl on upright bass and Sharon White Skaggs on rhythm guitar. As I’ve done on many of the albums I have out, I have to add my own verse, and in this case, a chorus, as well,” she notes. “As we were putting the songs down I noticed that Travis and Jared left the claps of thunder recorded thru my vocal microphone at the end of the song.  Then we noticed at the end of the same song, John Fullbright held out the accordion squeeze extra long.  Luke Bulla had also done some funny sounds at the end as well, on the fiddle. We mixed all these sounds in to be a part of the song.”

Ending the album is “The Ocoee Love Song”, written by Taylor as a Civil War love song.  “I was inspired to write a song about the strong women left behind during wars. How they really had to hold it together while the men were gone.”  The chorus is short and to the point—Just a girl when you left me/But a woman is now what you see. “My mother loves this song. I decided to re-record it, hoping she would like it with fiddle, upright bass, dobro, and another female voice added. She loved it!”

Speaking on her writing in the present versus earlier in her career, Taylor explains what works now. “I think my empathy has become more full-figured, able to listen and care for my friends’ needs without judgement…this really helps me open up my writing vista.  I brainstorm ideas and words easier, flow with the direction a song and story takes me, and thanks to more experiences and more of an open heart, I feel I write more easily. Melodies come from new directions.  I play bass for my husband when we perform together-his songs are bluesy, reggae, jazz, and funky. Stretching my musical tastes and playing really helps my chord structures expand too.”

Each song on Trains, Rivers, & Trails is well-written with important, distinct, and thought provoking stories.  “The Flow of the songs is pretty good for a drive down a river road, or following mountain trails, or watching a train from above as it winds through the hills or mountains,” said Taylor. “A train, a river, or a trail…always headed somewhere new. These songs take you on a journey. Enjoy!”

A Red Dirt Ramble: A Tribute to the Pioneers of Red Dirt Music. With over 55 guest vocalists and musicians from the Oklahoma and Texas Red Dirt scene and many of the same key instrumentalists that worked on her solo record: John Fullbright, Roger Ray, Casey van Beek, Jake Lynn, Jared Tyler and Travis Fite.