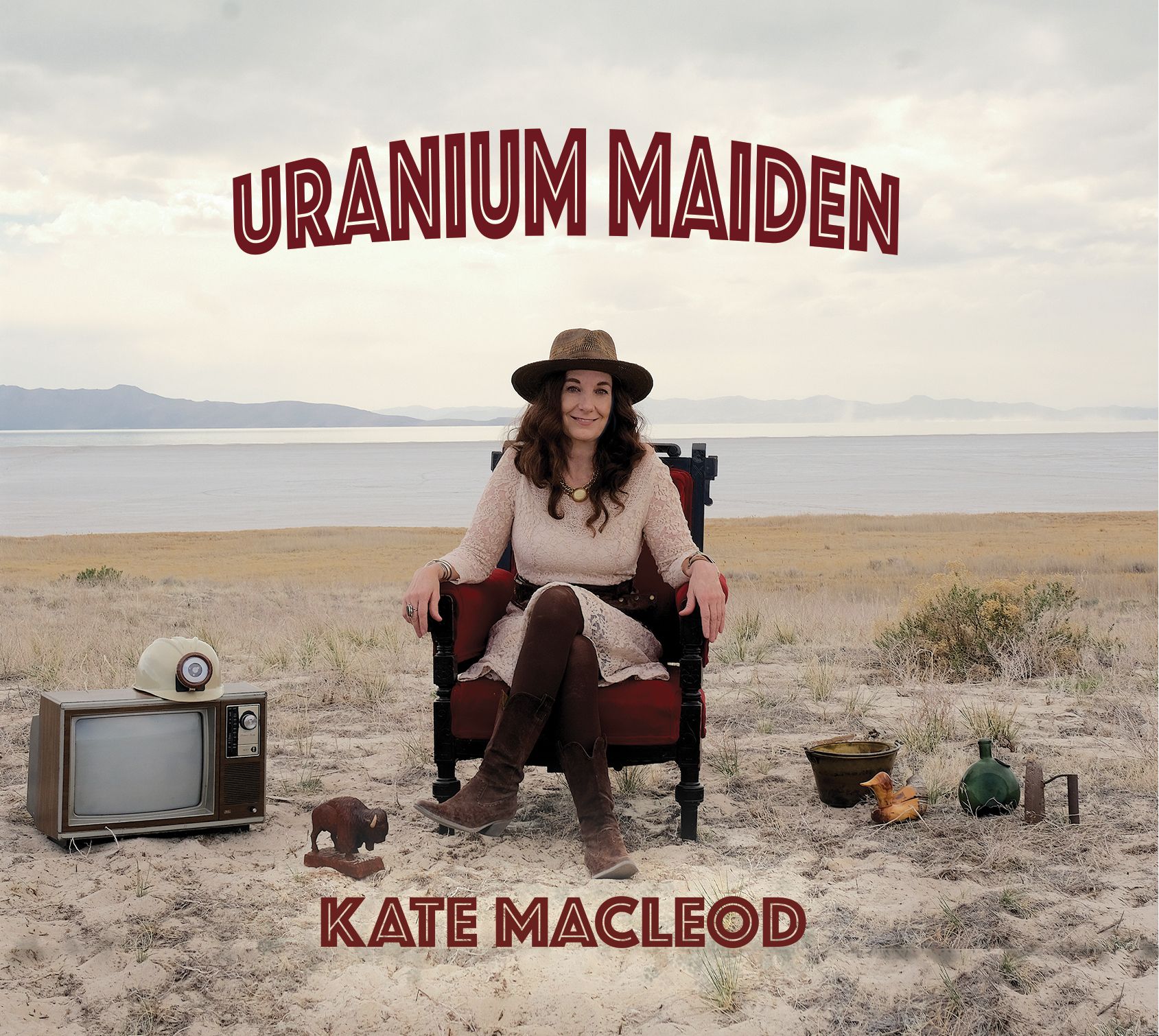 SONGWRITER AND FIDDLER KATE MACLEOD TO RELEASE URANIUM MAIDEN (February 4th, 2022)
Music From The Heart Of The American West - Inspired By Utah, Created For Everyone

Salt Lake City, UT—Dynamic and versatile Americana musician Kate MacLeod pulls her influences from all of the music she’s studied over time including, Classical, Celtic, Folk, Folk Rock, American Old-Time, Bluegrass, Eastern European, and Early Country music. The music has strong melodies and is highly poetic. You can hear all of these influences in her latest recording release, Uranium Maiden.

MacLeod is known as a songwriter, fiddler, and composer of thematic pieces of music such as landscape, historic characters and events. Her musicianship has been featured in a number of documentaries aired on PBS stations including, “My Canyonlands: Kent Frost”, “We Sagebrush Folks”, and “Zion Canyon Song Cycle”. The music in Uranium Maiden was inspired by the region that she lives in, Salt Lake City, Utah. “I wanted to create a beautiful listening experience from the heart of the American West,” she explains. “This recording includes historic characters of the Utah region, true stories by pioneer women, coal miners, explorers, and environmental issues. It also includes some contemporary themes.”

Co-Produced by MacLeod and Michael Greene, there are 17 original tracks on Uranium Maiden, 4 of which are instrumentals. The recording itself took 6 years to complete and is a culmination of many

years (1980s-2021) with contributions from 22-plus musicians. “Most of the musicians that are included on this recording have a history of making music with me over the years that I’ve lived in Utah. But I also made sure to invite some of the influential and interesting musicians in Utah, such as pianist/composer Kurt Bestor, and Native American musician Nino Reyos.” Although inspired by the region, MacLeod hopes that the music will reach beyond the borders of Utah finding a commonality in the shared human condition.

The recording starts with the song, “Now is the Time to be Alive”, inspired by the journals and letters of Everett Ruess, a young man who disappeared in the desert of the SW, near Escalante, UT in 1935. Musically, it has an expansive feeling, echoing the Southwest landscape. The atmospheric “U-235” is a duet between Nino Reyos and MacLeod. It’s a poem put to music, questioning our use of uranium for destructive purposes. “I’m not certain, but this may be the first time that Native American instruments and a mountain dulcimer have been recorded in the same music piece,” said MacLeod.

The instrumental, “The Train Across the Great Salt Lake” has an acoustic feel to it, heavily driven by MacLeod’s acoustic guitar and harmony fiddles. “Storm on the Desert” is a more produced track, the closest MacLeod gets to “rock” in the collection, with an expansive violin solo at the end. “This song was written during an Artist-in-Residence. I was staying in an old haunted house and was having an argument with someone on the phone, while outside a lightning storm was raging. From experiencing the ghost, the argument, and lightning, this song came along.”

The aforementioned pioneer woman makes her appearance with the song, “ A Fire I Can Borrow From”. The song has a very traditional folk feel to it and was commissioned from MacLeod by Utah Heritage Arts. A true story, it is based on the woman’s journal entries while living in a cabin in Sanpete Co, Utah. “I’m sure that when pioneer women made entries into their journals 150 years ago, they would never have considered that their experience would be compiled into a song by a complete stranger sometime in the future. But as a writer, this kind of thing excites me.”

“Sand in Breeze” is a solo violin vignette that channels the swirling of desert sand in the breeze through the voice of MacLeod’s violin. The Bluegrass-tinged “Every Year Among The Pines” is based on an annual gathering of people who are descendants from a small town, Widtsoe, Utah, that is now a “ghost town”. The song was another commission from MacLeod by Utah Heritage Arts and the lyrics were derived from a book about the subject.

“This album is the most produced recording of mine,” MacLeod remarked. “ It encompasses a life-long experience of living in the American West. I wanted to create a beautiful listening experience from out of the West, because there is a strong music scene here which is often overlooked by the rest of the country.”

Kate MacLeod’s songwriting style and live performances display an unbreakable link between traditional music and cutting-edge contemporary songwriting. Whether in a song or on her violin, guitar or mountain dulcimer, she captures our history, landscapes, and our lives in the varied music that she creates. With Uranium Maiden she unmistakably captures the spirit of the American West and channels that into a universal human experience.