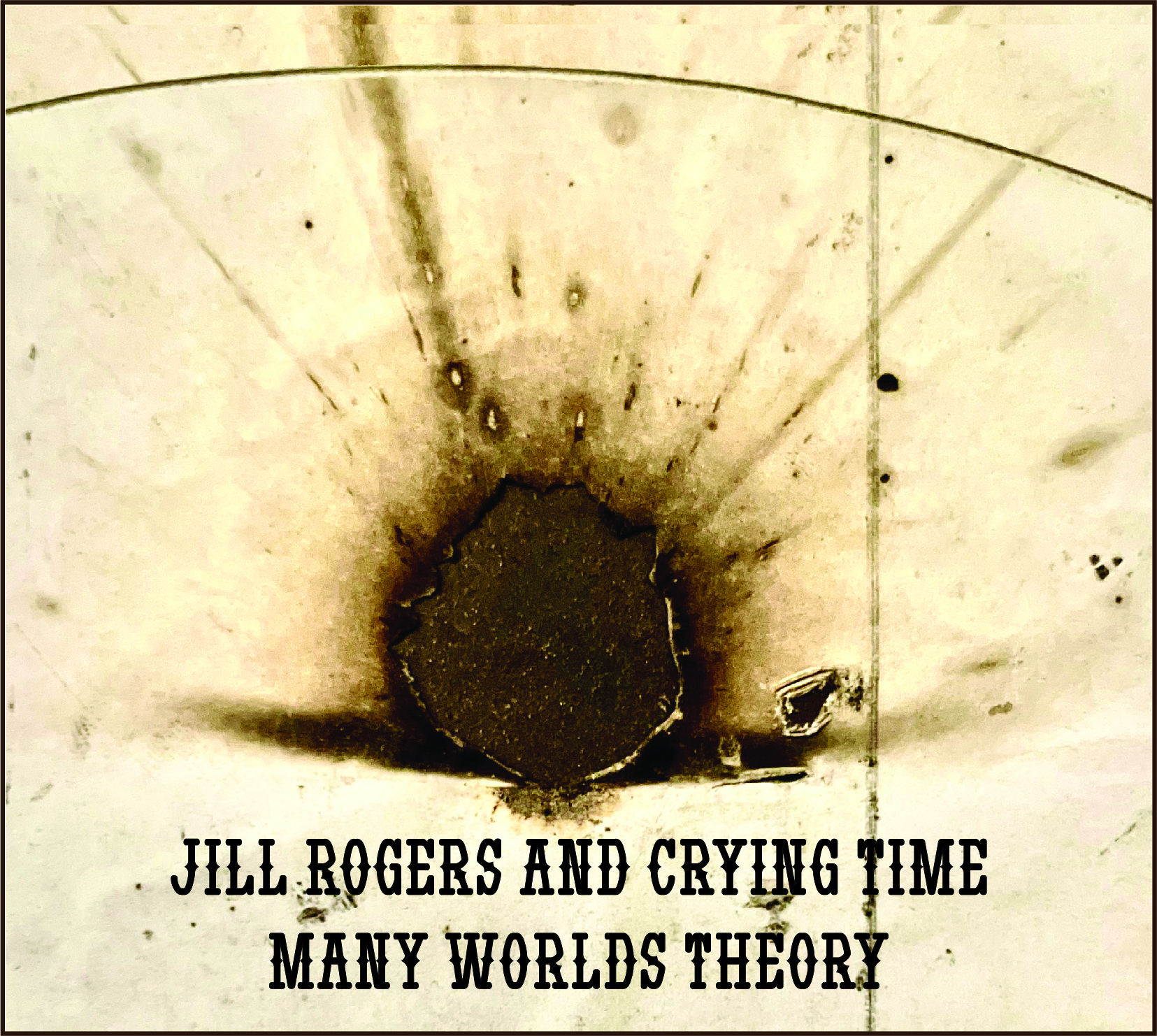 JILL ROGERS AND CRYING TIME RELEASE MANY WORLDS THEORY (APRIL 7, 2023)
Stretching The Limits Of Country Music By Pulling Rock, Soul, And Bluegrass Into The Mix

Oakland, CA January 2023—Quantum mechanics and country music don’t usually go hand-in-hand, but Jill Rogers and Crying Time aren’t your typical country music players. Singer Jill Rogers explains the title track, “Many Worlds Theory” - “There’s an idea in quantum mechanics that at any decision point where more than one outcome is available, all the outcomes happen in worlds that exist in parallel.” In the song, the narrator muses about what might have happened if a night at the local bar had gone differently, or if she and her now-gone romantic partner had made different vacation plans, or if she had just kept her thoughts to herself. That song and its central idea, the multitude of what-could-have-been narratives, serve as a lens for the other songs on the album - that they’re all possibilities in some world or another.

The band is a stalwart of the Bay Area’s vibrant country music scene. They’ve been working together for 10 years, rehearsing weekly to perfect the band chemistry and refine their sound. All of the band members are steeped in vintage country recordings, and have spent years absorbing the sounds, songwriting, and stylistic conventions of the genre. These influences come through in their original songs, which sound familiar and true to the still-beating heart of classic country, but without indulging in worn-out clichés

Known on the scene as being a musicians’ band, they boast a rock solid rhythm section that swings hard but also plays with great restraint. Drummer Tim Rowe and lead guitar player Myles Boisen have roots in experimental and improvised music. Boisen also has decades of experience as a session musician and record producer in all styles of music. Meanwhile, Rowe broadened his musical career with graduate studies focused on U.S. popular music, concentrating on mid 20th century country music. Bass player Russell Kiel has played in local bands for years, and is a highly sought-after player. He received an education in bluegrass, folk, swing, country music doing sound at the Freight and Salvage Coffeehouse, one of the west’s go-to venues for touring roots musicians. Violinist Tony Marcus is a veteran of the Bay Area scene and has played with everyone who’s anyone on the western swing and folk circuit, including The Cheap Suit Serenaders, R. Crumb’s retro string band. Rogers is known for her flawless voice, the emotional depths she reaches, and the style and inflection she brings from her work in jazz.

The band’s original songs push the country genre beyond its three-chord roots, with lyrics that speak plainly about complex emotional ground. The album kickoff, ”Bird Song," describes the feeling of being trapped in a dying relationship, while something completely different is possible just outside the window. Isn’t it lovely when the bluebird sings /Telling me sweetly how to spread my wings /It’ll be better now she’s promising/Open your heart to what tomorrow brings.

Rogers wrote most of the 13 songs on the album, with Boisen contributing a lively polka (“I Only Cry When I’m Drinkin’”),  and Marcus offering up a western swing instrumental (“Devil in the Details”).  There’s also a bluegrass cover from Del McCoury, “More Often Than Once In A While," and a lesser known Willie Nelson cover, “You Left Me A Long Time Ago” that  the band turns into a Tex-Mex number.

“The Mess (That Used To Be Me)” was released as a single in 2019, but the version on this album is grittier with a dirtier guitar and more abandon. Rogers tells us “Speedwell” grew from a small, finger-picked acoustic guitar number into a more fully realized piece, hauntingly moody with layered acoustic, electric, 12-string and pedal steel guitar tracks. The band invited some guest players (see below) and the addition of horns to “Tears, Time, and Ink” nudges the song into Muscle Shoals-style soul territory, while the mariachi trumpets on “I Only Cry When I’m Drinkin’” nod to the influence of Mexican music in California country music.

Many Worlds Theory is the band’s fifth album. Earlier releases include Ten Golden Hits (2015), Linda (2016), Last Saturday Night (2018), and King George (2019), a tribute to George Jones that features vocals from other Bay Area luminaries (Maurice Tani, Joe Rut, Val Esway) and pedal steel work by pioneering player Bobby Black. Many Worlds Theorywas recorded and mixed by Boisen at Guerrilla Recording, the studio he has run for the past thirty years. He also mastered the album at his Headless Buddha Mastering Lab.

“The making of this album stretched over six months and was the source of the worst fights we’ve ever had as a band!” shared Rogers. “We fought about the level of the vocals, Tony’s violin parts, the cover art—you name it. I think we’re okay now, but I don’t think we have enough perspective yet to look back fondly at its making.  But it’s a damn good record.” Marcus adds, “Recording an album can be stressful.  Having a resident recording engineer as lead guitarist kept everything more relaxed, which encourages more risk taking.  I’ve really enjoyed playing on Jill’s new songs, which venture into different and interesting musical directions for the band.”

Not only was the band in-studio recording Many Worlds Theory, but they also ventured back out into the world for gigs. Recalling their first show after the lock-down phase (May 2021), Rogers describes the impassioned relationship between artists and fans. “It was at an outdoor venue that had been created during the previous few months.  Our show was the second in a series (John Doe was the first). The place was filled to capacity-a couple hundred masked people.  This was the first show most of them had been to in over a year. They were as starved for live music as we had been to play. Many of them came up to talk to us afterwards, nearly in tears. It was really moving - a testament to live music and that exchange of energy that happens between performers and audience.”

With vocals strongly influenced by singers from the 70’s, adventurous guitar playing, in-the-pocket bass, drums that drive the sound, and fiddle work described as “containing the whole history of American music," Jill Rogers and Crying Time bring a wealth of experience in performing and recording, and together they produce tightly woven, spry and energetic sets that turn heads and keep audiences enthralled.

In Many Worlds Theory, the band stretches the limits of country music with complex lyrical ideas and broad chord structures, making it a spacious and masterful album.