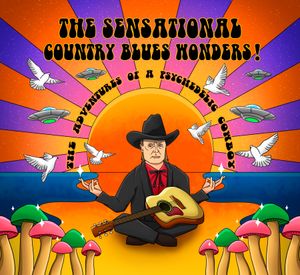 THE SENSATIONAL COUNTRY BLUES WONDERS! RETURN WITH THE ADVENTURES OF A PSYCHEDELIC COWBOY

Jersey City, NJ June 2022—Gary Van Miert’s philosophy of saying yes whenever asked to do something outside of his comfort zone has taken him to some very interesting places.  Performing under the moniker, The Sensational Country Blues Wonders!, Van Miert is a singer, songwriter, musician and entertainer who specializes in Americana.  “I have my own unique interpretation of American roots music—classic country from the fifties and sixties, down-home spiritual songs from the golden age of gospel, and time-honored blues numbers that go back to the greats hailing from Mississippi and Chicago.”

Combining these elements to create a “one of a kind” musical experience, his sound has recently evolved to incorporate elements of psychedelic music from the sixties into the mix. The Adventures of a Psychedelic Cowboy is an album of deeply introspective, trippy, whimsical, and spiritual songs.  This collection is influenced by psychedelic art and music of the sixties, such as the Jimi Hendrix Experience, Thirteenth Floor Elevators, Peter Max and Salvador Dali.  Other influences include traditional country music, Lewis Carroll, and British music hall filtered through The Kinks and The Beatles. “During Covid isolation, I spent time reflecting on my life, trying to make sense of existence, and exploring my sense of awe for the universe,” he explains. “This song cycle is the product of that inward journey.”

As the founder and leader of The Sensational Country Blues Wonders!, Gary Van Miert has been a longtime staple of the Jersey City Arts community.  He tirelessly gives his talents and time to all manner of benefit concerts and church services, and has also taken the time to lead and develop an educational program that focuses on American Roots music at the Jersey City public library.  For most of his life, performing music had been a hobby.  “It was thrilling to go out gigging in my fifties and become a local celebrity/luminary,” he confesses.  Playing hundreds of gigs in the New York and New Jersey area, his band has shared bills with national acts Marshall Crenshaw, The Smithereens, and Evan Dando.

Van Miert and The Sensational Country Blues Wonders! released their debut original record, The World Will Break Your Heart in 2020 to much national and international acclaim. Americana Highways declared that Van Miert “…brilliantly infuses classic country, blues, and gospel…” while Americana, Roots, Country, & Bluegrass Music effused that “There’s little doubt that Gary Van Miert is a master of American roots music.” The record was written before the pandemic, but recorded during. Out of necessity, the instrumentals were recorded remotely using a service in Nashville, TN that provided Nashville session musicians with Van Miert recording his vocals at his home studio. The Adventures of a Psychedelic Cowboy was also recorded during the pandemic and used this same process.  “I’ve found it a very efficient way to work,” he states. “I’ve recorded the vocals at home, which is definitely more relaxing than in a recording studio.”

The songs on The Adventures of a Psychedelic Cowboy were written during Covid isolation and are more inward-looking, nostalgic, and personal.  “In between Covid variants, I was active. I had performed a number of local outdoor shows in the spring, summer, and fall months with local musicians who were available. When Covid reared its ugly head again, I retreated and began the process of writing and recording all the songs on the album. This album is my “Revolver” and “Exile on Main St.” all rolled into one! It’s got the experimental psychedelia the Beatles started incorporating into their music at that time mixed with the gospel, country, and other Americana elements the Rolling Stones utilized on Exile.”

A ten-song cycle of all original material, The Adventures of a Psychedelic Cowboy combines all of Van Miert’s influences; gospel, country, Americana, and Rock n’ Roll and layer it with experimental psychedelic elements.  There are the straight-up gospels, “I’m Beginning to Live in the Light” and “God is Gonna Take Me Home”. The Country ditty, “I’m a Caterpillar” which name-checks Franz Kafka, and the rocker, “I’ve Got Memphis on My Mind”.

The cosmic elements show up with the first song, “There’s a Hole in the Fabric of My Reality”, a kaleidoscopic number about having a breakthrough in your perception of the universe and a sense of wonder about everything.  Musically, this song features sitar, mellotron, and theremin to create the aural equivalent of an altered state of reality.

“Breathe” is a trippy children’s song with a New Orleans flavor, a cosmic nursery rhyme celebrating the wonders of breathing.  “The Psychedelic Cowboy Song” is a mind-bending tune about the joys of exploring the cosmos without limitations.  Musically, it has a chamber-pop-meets-psychedelia feel to it, enabling the listener to imagine they are floating in space. The Baroque pop, “Life is So Freaking Beautiful” is a surreal song about the nature of reality and the realization that we are a part of something bigger than ourselves.

“Music of the Spheres” is a spacey sitar-infused song about the natural harmonic tones produced by the movement of the planets. It’s based on the theory by Pythagoras and his followers in ancient Greece that celestial bodies make music.  You can’t get more psychedelic than that!

Considering himself a conceptual artist with music as his medium, Van Miert continues to incorporate new and different influences into his work.  “I’ve always traced music back to the source.  What I do is not watered down, because I go back to the originators.  Although I proudly wear my influences on my sleeve, I’ve taken the time to find my own unique voice. We’ve all been influenced by other performers, but even if you are doing other people’s songs, you need to make them your own.  I’ve always stayed true to my vision of what I think my music should sound like.”

Van Miert and The Sensational Country Blues Wonders! are known for their electrifying singing and performance style.  Van Miert writes original catchy songs that connect with an audience. “I also consider myself an entertainer and enjoy performing live and getting an immediate reaction from an audience.”

To quote a musician friend of Van Mierts, “Whether he’s leading a band through a concert or congregation in song at church, it’s clear that Gary Van Miert is a tireless force of nature who has and will contribute to the richness of the artistic and cultural wealth of Jersey City.”  With The Adventures of a Psychedelic Cowboy, Van Miert is sure to bring that energy to the rest of the country and beyond.